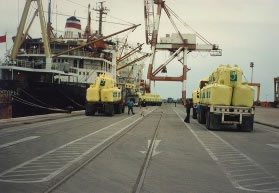 Performance certification of FIBC's is normally required by industry. In the case of transporting dangerous goods it is mandatory in most countries. Standards for Non- Dangerous Goods FIBC's commonly used throughout the world include:

In 1989 the AFIBCA Standard AS 3668 was published and was widely adopted as the industry guideline throughout Australia and New Zealand and parts of ASIA.

UN Recommendations for the Transport of Dangerous Goods. All FIBC's carrying dangerous goods in Australia must be UN approved.

For Food contact packaging the Australian HACCP code is commonly referred to.

There are many laboratories setup around the world and one in Australia for testing FIBC's. Most are reputable establishments but some overseas laboratories are not harmonized with our NATA Association.

With certificates for non dangerous goods FIBC's, they can be supplied by any test house but we recommend that they come from a test house recognised by NATA.

AFIBCA recommend that only FIBC's with labels affixed should be purchased. The minimum information required on any label is;